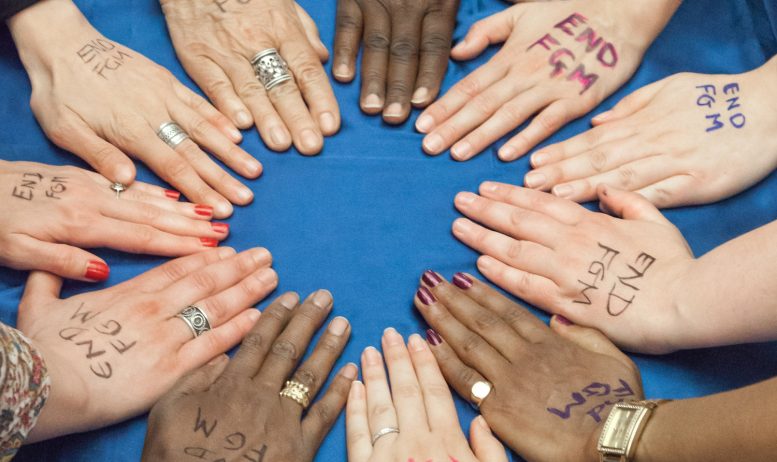 This article was first published at www.themediaproject.org

This is just one of the surprising facts to emerge from a conversation with a small woman who has taken on everyone from the Pope to David Cameron over a practice that keeps the world in poverty.

Ann-Marie Wilson, 55, quietly spoken with a bright smile, is the founder of 28TooMany, a British charity which campaigns to end the most extreme and damaging of the world’s religious rituals.  (28 refers to the number of countries that had not outlawed FGM when she began.)

The practise which involves the removal of the prepuce of the clitoris and surrounding tissue and is sometimes known as ‘female circumcision’, pre-dates both Christianity and Islam, and is commended in the core texts of neither faith.

Ann-Marie, a doctor of psychology and a midwife who trained in Pakistan, recently completed a paper on the origins of FGM, claiming that the mummies in the British Museum show clear signs of FGM.

‘The Sudanese blame the Egyptians; the Egyptians blame the Sudanese,’  she says wryly, adding that what was clear was that it was a black on black slave practise, which Muslims then carried around the rest of the ummah.

It is certainly most prevalent among Muslim communities in Africa, although Yusuf al-Qaradawi, an Egyptian religious scholar based in Qatar says it is not obligatory.

He has ruled that it is allowed on the basis of ‘hadith’ or sayings of the Prophet, nonetheless, and says:  ‘. . . whoever finds it serving the interest of his daughters should do it, and I personally support this under the current circumstances in the modern world.’

Christians also practise it where Christianity is just ‘an overlay of traditional religion’, according to sources in Sierra Leone, where 89.6 per cent of all women have been ‘cut’.

Thanks in part to the work of 28TooMany – which targets 28 African countries where it is practised – six have now outlawed it.

Just three countries, Egypt (97 per cent), Ethiopia and Indonesia, the most populous Muslim country in the world, account for more than half of the 200 million women and girls who have undergone what can be a life-threatening procedure, according to UNICEF.

As many as one-third of girls in areas of Sudan where there are no antibiotics will die, according to another report.  The complications range from haemorrhage to tetanus, blocked urethras and infertility.

Sierra Leonean academic, Tom Bosire who did his PhD on FGM at Glasgow University in 2012, explores the link between FGM, the secret societies (Bondo) where it is done, and political power.

‘The Bondo society leaders are keen to maintain the status quo because of the forms of power accessible to them in the local socio-economic and political context’, he writes, noting that worldwide abhorrence actually impedes campaigns.

The fearful occult requirement for blood-letting, the need to appease the ancestors through the correct practise of traditional rites, and the threat of murder for anyone who breaks the taboo of secrecy, makes for a deadly triple lock on the most oppressive of the world’s religious rituals.

Bowenson Phillips, a Freetown-based development consultant, says: ‘If you refuse it, they say you are not part of us, part of the lineage.  You will not receive the blessing of the ancestors.  You become an outcast.’

It is what keeps Sierra Leone for one, steeped in poverty.  The traditional leaders or paramount chiefs oversee the Bondo and their male equivalent, the Poro.  They receive fees for marriage licences – granted only to initiated girls.  And they control the vote at elections, with seats in parliament.

Yet, Sierra Leonean Zainab Bangura, former Under-Secretary General at the UN, with special responsibility for Violence against Women in Conflict, built her house opposite a sacred grove where initiation happens, and even admits she has done nothing to challenge it.

Speaking to me from her home in Freetown, she said:  ‘We politicians know it goes on, but we go along with it for the votes.’

This is the radioactive core of Africa’s poverty: the collusion of power with harmful traditional practices that paradoxically strengthen women socially – they do not need male permission to attend the Bondo, where they prepare for motherhood – while preventing change.

And the West is slow to tackle it for fear of being accused of racism.  Not one single prosecution against it in UK has succeeded, despite a new law in 1985, updated in 2003.

Ann-Marie has two thousand supporters praying for her and her work.

That’s because, as Bowenson Phillips puts it, unless the spiritual warfare dimension is understood, nothing will change.

‘The root of the problem is beyond just the physical; the root is spiritual and religious and that can only be approached in love.’

Tackling this needs a strong nerve.  Yet, Ann-Marie Wilson, just 55 and unmarried – ‘I had too much to do to marry’ – has cancer.

That did not stop her bravely doing a three-week tour of Africa right after she had been pre-diagnosed in 2015 – a tour that succeeded in getting the law changed in Gambia, after she met with the minister.

‘I didn’t want to default on my insurance,’ she laughs.

The Gambia is one of six countries that have now enacted laws against FGM partly through her efforts.  This has won several awards for Ann-Marie, including the British Citizen Award in 2015 and the Good Housekeeping Heroine of the Year Award in 2016 for Ann-Marie.

She has credibility not just because of the sacrifices she has made personally, but because she is getting results.

Chivvying and cajoling, all in a disarmingly winsome way, this delicate, blond feisty woman has met her target of a ten per cent reduction in FGM incidence in ten countries in Africa within ten years.

She founded the charity in 2010, out of a searing encounter with female suffering.

She met a five-year old girl in Sudan when she was working with Christian charity Medair, who had had female genital mutilation (FGM) at five years old. At ten, she was raped by armed militia, who burned her village, killing all her family and community, and she was left orphaned and pregnant.

‘Meeting her, aged 11, with her baby changed my life. This has become my life’s work.’