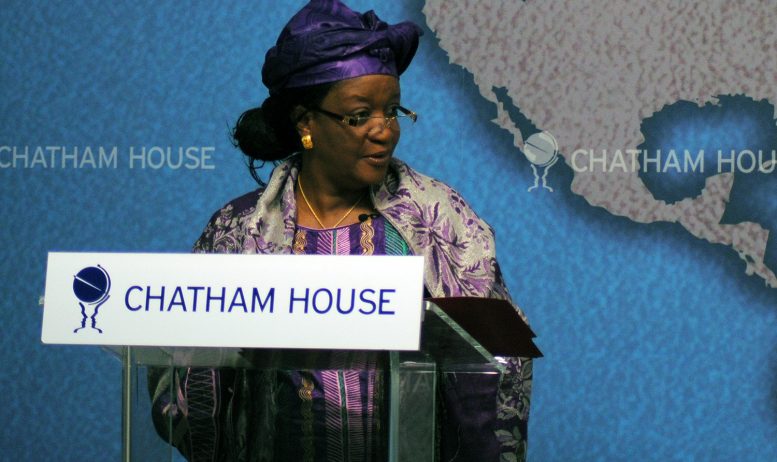 LONDON, 20 February 2018 – In the wake of the UK-based Oxfam scandal in which aid workers in the Haiti earthquake aftermath exchanged aid for sex and used local prostitutes, disparate Christian voices around the world are calling for reform to the Western aid system.

As the UK’s Daily Express calls for a ‘crusade’ against development spending – the UK currently commits by law to an aid spend of 11 billion per year, .7% of its annual budget – a growing chorus of African academics are lending weight to the search for alternatives.

Zainab Bangura, until 2017 Under-Secretary General of the UN and one-time Minister of Health and Sanitation in Sierra Leone, said aid was unaccountable, and demoralising.

‘People don’t believe they can do anything on their own any more.  Long years of support by donors makes you donor dependent.’

Speaking to The Media Project from her home in Freetown, the former Health and Sanitation Minister Mrs Bangura who recently stood down in the race for president, blamed the donor world’s inability to criticize national governments.

From having one of the strongest economies in the world in the 1960s, Sierra Leone now imports rice.  Although the war ended in 2001, the country is now the third hungriest in the world, according to a Harvard-based think tank.

All this despite still receiving, on one estimate, a staggering US$882million per year in foreign aid hand-outs.  Last figures published by OECD indicate this is a tiny fraction of world aid to Africa as a whole.

Sierra Leone is a tiny country of 7 million population and immense natural resources.  Yet 75 per cent of its male population is unemployed.

So corrupt is it that even £10million of Red Cross ebola funds were embezzled.  Even the Anglican church is presently embroiled in an embezzlement scandal involving the bishop of Bo, and six of his officials.

As the entire aid industry gets caught up in the fall-out from the Oxfam scandal, the call by Tory maverick Jacob Rees-Mogg’s for an end to Britain’s aid commitment and a switch to investment instead is gaining traction.

Yet it is not just the ‘charity-begins-at-home’ right wing who are anti-aid.

‘It’s a way of destroying our society in many ways, one of which is the dependency syndrome.  Our people sub-consciously learn to look for hand-outs.  They believe they cannot help themselves.  It has crippled innovation and business drive.’

Indeed, the UK’s Department for International Development (DfID) is criticized this week for not managing the risk of future dependency.

In its latest report published this week, the Independent Commission for Aid Impact, says:  ‘DFID’s approach was not adequately reporting and capturing results and value for money at the country portfolio level, or how programmes work together to deliver lasting impact, including reducing future dependency on aid.’

Sierra Leone is a glaring case in point.  Hardly poor, it sits on the world’s largest iron-ore deposits, and has vast untapped diamond and other mineral wealth.

Yet its people remain in shocking poverty, caught as they are in a vice of graft on the one hand, where wealth – including aid – is creamed off by the few, and on the other, a worldview that missionaries note is the opposite of ‘functional’.

This is shorthand for fear of the occult: the collusion by ‘mystical aggressors’ with sin and negativity that appears to have no obvious practical benefit or reason.

In traditional societies, change threatens the established order, which is built around a religious attitude that seeks to maintain equilibrium at all cots.  When things go wrong, there is only one explanation.

Writes Keith Ferdinando who wrote a study of African demonology after working in Congo with African Inland Mission: ‘Witchcraft and sorcery beliefs are all too evident.

‘They undermine initiative as the farmer, for example, who increases his crop yield may be accused of using “medicine” harmful to the fields of his neighbours, and may indeed himself fear occult aggression by the envious.’

Even re-using an old rice-milling pot as a flower pot is considered dangerous.  I encountered a gardener at a luxury home in trendy Freetown who refused to re-cycle an old pot, deeming it to be harmful to the spirit of the pot.

This makes it difficult or impossible for small farmers to upscale their ways of operating, and politicians give such attitudes lip-service, according to Bangura.

‘When people want political power, as educated as I am, my response to these practices, in order to bring these people along, is to encourage and accept what they are doing.

‘We the political class have refused to help the people and encourage them in that circumstance because we feel it is the only way we can get the vote.’

Businessmen who try to exploit the country’s vast agricultural wealth have found they face an uphill task, and many who are honest go to the wall.

Says Mike Gericke, a Zimbabwean rice farmer, based in Bo who moved to Sierra Leone from Zimbabwe ten years ago, when his farm was stolen by Mugabe, failed to interest the international community in such an unreliable investment.  Lion Mountains, the rice growing, milling and distribution company he set up, is fighting for its survival because of lack of ongoing investment and support from government.