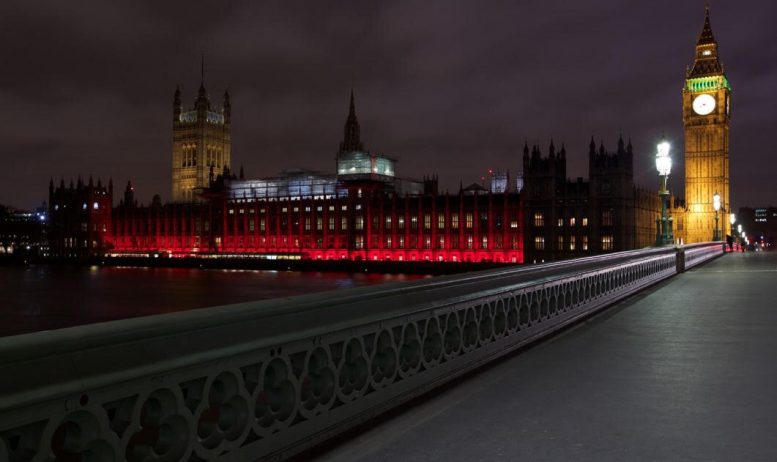 The total eradication of Christian persecution – including in the UK – comes a step nearer realization tonight with the first ever reception at the UK Foreign Office to recognize it.
Normally Red Wednesday, when state buildings are lit with red laser beams “for the blood of the martyrs” comes and goes without much notice.
But this year on Nov. 27 Prime Minister Boris Johnson’s new Special Envoy on Freedom of Religion and Belief, Rehman Chishti, a British Muslim and Conservative MP born in Pakistan, will address the event on behalf of beleaguered Christians, who number 80% of all those in the world who are attacked for their faith, according to the FCO.
The recognition of Red Wednesday was one of 22 recommendations in the global Christian persecution report (called the Truro Report) accepted by the PM and announced by Foreign Secretary Jeremy Hunt in July.
Although laser beams on buildings may not change the world, symbolic gestures count when national leaders are behind the thrust to address the single worst global human rights scandal.
The UK lags well behind the U.S., which passed its International Religious Freedom Act in 1998.  Prince Charles, Coptic Archbishop Angaelos and the PM’s Faith Tsar Jonathan Hellewell are thought to be behind the determined new push on religious freedom.
Britain is now pledged to “aspire” to become the “global leader in championing Freedom of Religion or Belief,” according to the Truro Report, drafted by former head of the Church of England’s Missionary Society, Philip Mounstephen, Bishop of Truro in Cornwall.
A range of education, training and coordination tools are being put in place to make sure diplomats abroad do not do “creed blindness” in policy implementation that fails to see religion as a “vulnerability marker” in some parts of the world.
Worst cases have seen Christian refugees being herded into camps with jihadis who destroyed their homes.
The Truro Report was outspoken in condemning the negative consequences of the mantra of “need not creed” that seems to prevail in posts abroad.
“The Foreign Secretary should reject the mantra in FCO foreign policy contexts entirely,” the report said.

One hundred and twenty public buildings will be lit up across the UK after dark Wednesday, including the FCO building in King Charles Street. Thirteen cathedrals including the Roman Catholic Westminster Cathedral in London will also go red.
Organized by Catholic charity Aid to the Church in Need, a candlelit cross procession is leaving Parliament Square at 6:15 p.m., arriving at Westminster Cathedral at 6:30 p.m. in time for an open-air service. Chishti, the 41-year old Conservative MP for Gillingham, will speak after leading the procession. Chishti is the son and nephew of Pakistani imams.
He was educated in England, and resigned as a Deputy Chairman of the Conservative Party over Theresa May’s refusal to grant Asylum to Asia Bibi, the Christian mother-of-five who spent eight years in a Pakistani gaol on trumped-up blasphemy charges. She was acquitted in 2018 and is now in Canada under tightened security.
Aid to the Church in Need say that religious freedom is being taken increasingly seriously since the publication of the Truro Report.
It helped raise the profile of religious groups being oppressed for their faith with 40 pages of footnotes detailing reports of atrocities.
Spokesman John Pontifex said: “We have excellent relations with Rehman Chishti; we liaised closely in connection with the Pakistan Asia Bibi case last year and he kindly came and spoke at last month’s launch of our ACN Persecuted and Forgotten? A Report on Christians oppressed for their Faith 2017-19.”
In the Middle East, Christianity is at a point of near extinction. Before 2003, there were 1.5 million Christians in Iraq. Today there are 150,000 with some reports putting it as low as 120,000 following the persecution of minorities by jihadists.
At the same time, Islamist extremism has extended its reach to Sri Lanka and the Philippines. India’s government under Prime Minister Modi grows increasingly populist and Hindu nationalist. North Korea and China continue to persecute Christians ruthlessly.
A priest in clerical garb and his father were recently shot by suspected ISIS followers in eastern Syria on their way to help rebuild a church destroyed by the group.
Lebanese Christians are also at risk as corruption seizes up the economy.
And lawyers say Christians in Britain who continue to be hounded out of office for expressing beliefs on sexuality, despite legal protections, may receive better treatment if FoRB provisos are taken more seriously.

The Houses of Parliament on Red Wednesday.  Photo:  Aid to the Church in Need