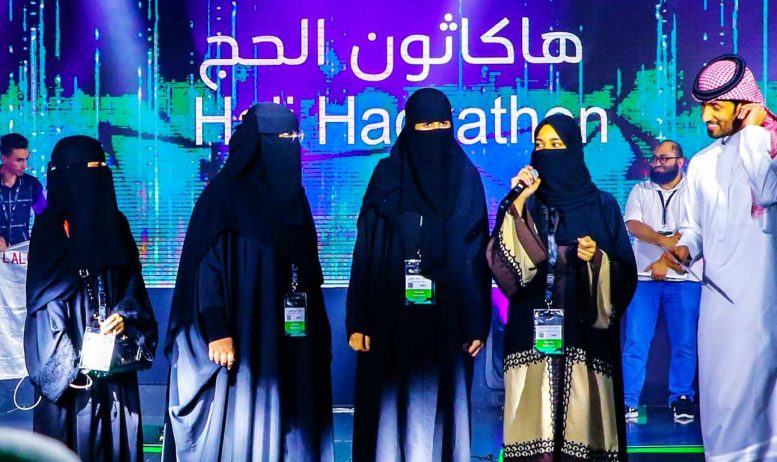 AN all-woman team has won the first ‘hajj hackathon’.

But heavily veiled in black sheets to receive their prize money, they reinforced the glaring anomaly of a nation attempting to project a shiny tech face while simultaneously cowing the world with a backward version of the faith.

The ‘hackathon’ – a competition to devise an app to improve the experience of pilgrimage for the world’s billion Muslims for whom it is a core religious duty – denotes confusion at the top level.

To the world at large, the inner life of Saudi Arabia and its monarchical rulers is mysterious.

Global media do not cover the affairs of the desert kingdom in detail, since access is as restricted as it is to Chinese-occupied Eastern Turkestan or Tibet.

Saudi rulers proclaim fealty to the faith of Islam.  They control access to Mecca, the Holy House for all Muslims and the destination for millions of pilgrims making hajj, an obligatory journey for all who may afford it.

Oil wealth has provided the Saudis, who invented a form of fundamentalism called Wahhabism, to spread their bizarre doctrine all over the world, in Muslim-majority lands and Muslim-minority communities.

Tens of millions of traditional Sunni Muslims in the Indian subcontinent and elsewhere consider Wahhabism to be an anti-Islamic heresy.

This review of the foundations of Saudi rule may seem tedious to some readers, but appears necessary at present, as the global powers and worldwide media seem befuddled by developments in the country.

Saudi-Wahhabi rule is brittle.  It is the richest Muslim-majority domain yet is saddled with extraordinary backwardness. Examples abound.  While energy makes Saudi Arabia one of the richest states in the world, it has failed to produce a significant technical elite, while education remains focused on indoctrination in Wahhabi pseudo-theology.

Restrictions on women have an atavistic character.  A morality militia, the mutawwa, interferes with legal norms.  Production of literature and the arts is stunted.

The Saudi rulers know increasingly that their social and political institutions are incapable of preserving them or their subjects in an international context marked by advancing crisis.

While they posture as the world’s best Muslims, the Saudi masters have grown no less distant from morality than Russia or China in repudiating the ways of religion.  The rulers defy Muslim standards by indulging their tastes in sexual decadence and their addiction to consumerism.

Where is the way out for the Saudis?  They are beleaguered by militant Shia Muslims in Yemen, where the military, guided from Saudi capital Riyadh, engaged in genocide against Houthi resistance.

The long-standing partner of the Saudis, America, is sunk in political conflict.

The seventeenth anniversary of the 9/11 terror assault on New York and Washington, which undermined American world leadership, approaches.

The Saudis have never accounted fully for the role of their elite, and, specifically, the late Prince Nayef, in the 9/11 atrocities.  Sources both deep and high in the royal family point in that direction, but under thick carpets of silence.

In response to the horrors of the Syrian genocide, where a conspiracy headed by members of Assad’s Nusayri sect has devastated the Sunni Muslim majority, powerful Saudis finance revenge via the so-called ‘Islamic State’ or ISIS.

ISIS, with its panoply of cruelties, is Saudi Wahhabism in pure, undiluted form.

Saudi Arabia is at a crossroads. Its rulers are immobilized by their Wahhabi loyalties.

Saudi Arabia, representing totalitarianism in the name of Islam, has arrived at a historical juncture like that of Russia, formerly the Soviet Union, and the Communist former Yugoslavia, in the crises of 1987-91.

Whither Saudi? Foreign interests are dazzled by the claims of a princeling, Muhammad bin Salman, to pursue reform.

Known as MbS in media (‘More BS’ among Muslims), the Prince imitates Stalin and Mao in claiming that the purge of real reform elements in the business class, such as Prince Alwaleed Bin Talal, represents popular sovereignty.

Elsewhere, Saudi manifests its confusion in proclaiming abandonment of Wahhabi strictures on women driving, while devastating the civil-society activists who support so elementary a right.

The Saudi rulers cannot find a way out of their dilemma, so they resort to their oldest habit: meddling with the piety of ordinary Muslims, especially in the most vulnerable spiritual realm, that of the hajj pilgrimage.

The absurdity and chaos of Saudi leadership doctrine was displayed fully in August when, as reported in the media of the tech industry, the kingdom’s “hajj hackathon” purported to find ways to improve the efficiency of operations supporting the large movement of pilgrims.

This nonsense is comparable to hiring video-gamers to run military software.  It is a shiny object intended as a diversion for the world’s Muslims and an amusement for the Western élites that are hypnotized by MbS.

Hajj is sacred.  It should be made safer.  To do so is easy: improve traffic patterns.

Muslim believers should be alarmed at more Saudi tinkering with the core elements of Islam, even while they prove themselves so incompetent in basic statecraft.

The message to Riyadh should be: Do not hack at the heart of Islam! Do not butcher the faith!  Hands off Hajj!

JENNY JAMES TAYLOR specialises in religious literacy and was appointed Research Fellow in Communication, Media and Journalism at the Kirby Laing Institute in Cambridge in 2019. A Bloomsbury author and campaigner she pioneered religious literacy in journalism, founding Lapido Media in 2005 as a publicly subscribed online newspaper and publisher. Described by historian Tom Holland as 'groundbreaking', it helped to change the national secular discourse by providing resources for journalists needing to ‘get religion’ in an age of globalization. Widely travelled, Taylor has a doctorate in religion from the School of Oriental and African Studies, and has been published many times in academic journals and the mainstream and on-line media including the Guardian, the Times and, in translation, the European press. Her books include Faith and Power: Christianity and Islam in ‘Secular’ Britain with Lesslie Newbigin and Lamin Sanneh (SPCK 1998 and Wipf&Stock 2005) and A Wild Constraint (Continuum 2008). An Associate of the Community of St Mary the Virgin, she lives in community in London and Suffolk.