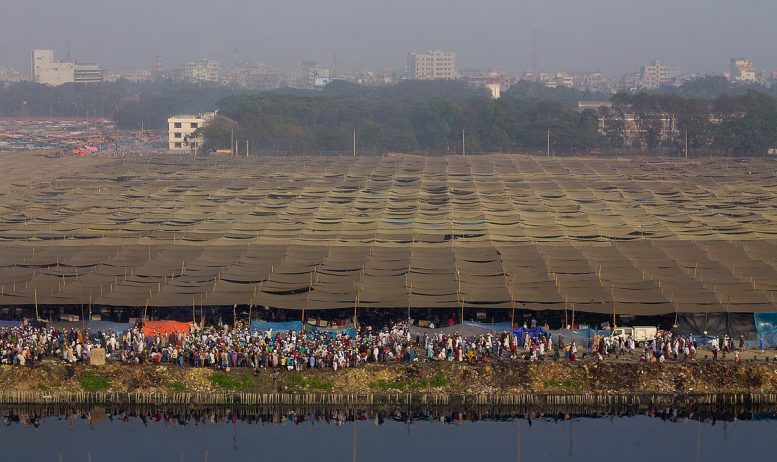 This piece was first published at The Media Project.

London, 26 January 2018 – A Muslim religious group has 28 days to appeal yet again a decision to have their illegal mosque near the UK’s former Olympic village demolished, despite twenty years of non-compliance.

Judge Walden-Smith threw out the latest appeal by revivalist Islamic group Tablighi Jamaat at the High Court on Friday (26 January) against an injunction to clear the site used by two thousand worshippers in Newham, East London.

She said they had made no effort to abide by local plans.

‘Despite the five-and-a-half months that had passed since the adjournment, there had been no progress in entering an agreement with a developer, no steps regarding a site investigation or decontamination of the land, no application for outline planning permission, no consultation with the local authority, and no solicitors instructed to deal with due diligence or licence agreements with a developer.

‘The trustees were very far from agreeing any sort of development for the site. They were continuing to procrastinate’, the Judge added, refusing the appeal at the High Court in London on Friday 27 January.

The Abbey Mills Riverine Centre site in Canning Road, Stratford, is a 6.5 hectare site on contaminated former chemical factory land purchased by the group for £1.4million in 1996 for a possible European headquarters or markaz.

‘Structures’  which have been illegally built up over two decades and used by up to 2,000 worshippers from across the region every week must now be taken down.

Dubbed the ‘megamosque’ by campaigners, the original plans accommodated 70,000 worshippers, and an Islamic training centre that would have been Europe’s biggest.

A furious backlash ensued, triggered by a petition by local Muslims at odds with the group, which resulted in scaling back the plans to a 9,000-capacity mosque.  But no master plan integrating proposals with the strategic needs of the deprived borough for social housing and jobs and which was promised since 1997 was ever forthcoming, despite being shown considerable ‘indulgence’, according to the judge.

The planning process has involved two planning inquiries before HM Inspectors, the Mayor of London, the Secretary of State and the Master of the Rolls.  The judge accused the Trustees of ‘obscurantism’ and ‘prevarication’.

‘Undoubtedly, the enforcement will cause hardship to the Tablighi Jamaat who have enjoyed the Thursday lectures and other activities which take place on the site.

‘Those activities are unlawful and while undoubtedly a benefit to the community and one they will miss, it has to stop.

‘From the outset the development of the mosque was contrary to planning permission and therefore precarious.  The current use of the site contrary to the injunction forthwith is a criminal offence.‘

Newham Borough Council said after the hearing that they expected the owners of the site ‘to comply fully with the requirements of the injunction.’

‘We will monitor activity and correspond with the owners to affirm expectations as to when the required work will be completed,’ they added.

Moiz ur-Rahman, a representative for the Tablighi Jamaat, told the court that the site was the only TJ site in London, and catered for tens of thousands of adherents spread from Oxford, to Milton Keynes to Brighton, who would face considerable disruption they would find ‘difficult to understand’.

‘They will return to the protests of before which appear to have been organized by the Newham People’s Alliance,’ he warned the court.

However, most mosques in London now use Tablighi Jamaat training methods, and an 800-capacity mosque in Christian Street, east London is owned by the group.

It is likely that Rahman is referring to ijtemas when vast numbers attend for days to hear sermons in huge open-air congregations such as in Tongi in Bangladesh [pictured] or in Raiwind in Pakistan,  both of which are bigger than the Meccan haj.  There is no other site suitable for such events that Muslims own in the capital.

Some believe they have been playing the system.  In the course of an earlier appeal in February 2011 against an enforcement notice applied by Newham, through their QC they gave a unilateral deed of undertaking that within twelve months they would submit a planning application for development that would comply with the local plan.  They undertook that if they had not done that, they would remove the unauthorized development.

In breach of that undertaking, they did not make an appropriate planning application and continued to use the land as before.

One legal source, commenting at the end of Friday’s hearing, said the system was being used to unfair advantage and criticized the lack of finality to the long-running case.

Costs of more than £22,000 were awarded against Tablighi Jamaat.

Photo:  Tablighi Jamaat Bishwa ijtema congregation at Tongi on the banks of the River Turag outside Dhaka in Bangladesh (Wikipedia Commons).