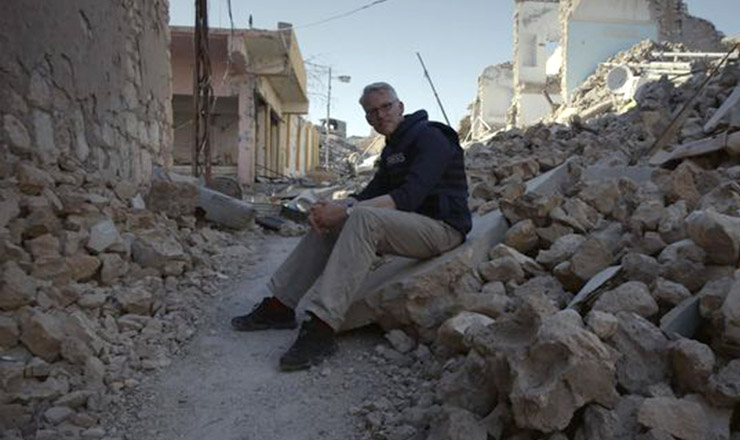 This article was first published by Providence Magazine.

LONDON, UK – On Wednesday night, historian Tom Holland – leading writer on the ancient world and author of no less than five award-winning civilizational epics – sticks his neck on the line.

He has made a film for Channel4 TV in Britain – sadly not available yet in the US – about the Islamic State, called ISIS: the Origins of Violence that even he admits was ‘brave’.1

In it, he goes back to Sinjar in northern Iraq, scene of genocide against the Yazidi people, escorted by a former SAS security advisor, and gets to within one mile of where ISIS are based.

Fearful of abduction, and standing by a mass grave of women considered too old to enslave, he evacuates the contents of his stomach.  You don’t see that bit.  Too gross.

But later he retches again in the stinking rubble and the camera deliberately lingers on his misery.

Tormented by the unreality of a genocide sanctioned by a holy text but ignored by the West’s liberal intelligentsia, he believes only a changed sensibility will result in a desperately needed and more effective foreign policy.

And he believes that message is so urgent, only a graphic film can do justice to it.

When the BBC’s Muslim Head of Religion, Aaqil Ahmed said on a Huddersfield University platform last year that ‘of course ISIS are Islamic: they’re not preaching Judaism’, the story went viral, coming right after President Obama’s disavowal of the same notion.

But Holland who is 49 is after more than a good soundbite in the media.  He wants to change our whole approach to what’s at stake.

He tackles head on what is perhaps the last great taboo – the proscription against linking the Qur’an, the sacred text of a billion Muslims, with violence.

He does two things in the film, one as a historian, the other as a citizen.  As a historian he examines the influence of Christian martyrdom on the tradition of Islamic martyrdom. And he goes to Paris to investigate the impact of the Enlightenment on the Islamic world in the age of Napoleon.

‘However much a historian may try to abstract him or herself from his/her individual feelings, and emotions and contexts, he is always a creature of them.  That’s what a film can do.  A book can’t do that’, he tells me.

Holland travels to Jordan to speak to a leading Salafi who directly cites, to camera, the Qur’anic justification for the actions of ISIS.

‘It had never crossed my mind that I would witness in the lands occupied by the Assyrians and the Romans, a campaign in which men were being crucified and women enslaved’, says Holland.

Yet the sanction for such behaviour are in the Quran and being actualised as we live.

Ideology and terror combined to make other empires great, says the author of Persian Fire and Rubicon. And it also made the Islamic State great.

To defeat the group, you must defeat the ideology – as the new religion of Christianity eventually defeated the brute imperialism of Rome.

‘Anyone who writes about ancient history and who revisits the primordial scenes of Mesopotamian civilization, who stares terror and violence directly in the face as directly as I did, cannot help but inform how one’s understanding of ancient imperialism worked.

‘It was coercive, ideologically coercive.  It was not just enough to commit atrocities, but those atrocities had to be justified with reference to God or to a ruler.  And that terror is an essential part of conquest.’

That cannot remotely be countered by the evasive nostrums of liberalism, he believes.

‘I am hoping we will be slightly less naïve in accepting that very very powerful and potent ideas are not all necessarily liberal!’ he laughs.

‘It is a liberal Protestant conceit that we have secularized, and it is grotesquely ill-suited to a religion that is as different to Western Protestantism as Islam.’

Unless that violence is stopped, it will spread, Holland wrote in an article last weekend for the Sunday Times, in which he likens it to the spread of cancer.

Unless Muslims construct what he calls ‘a clear and impregnable firewall between the Islam of those who find in it an affirmation of human dignity and the Islam of killers such as [the British medical student who exulted in the approval of God for the slaughter of Yazidis] Muthana,’ ‘there is a risk the defeat of Isis will prove to be only an episode in an ever-darkening cycle.’

A grim but real enough prospect.

For in one small home counties market town, nestled in the Chiltern Hills west of London, there is right now a Muslim in fear of his life for blowing the whistle on three imams who preached that the killer of the Governor of the Punjab in Pakistan who defended Aasia Bibi on a contested charge of blasphemy, was a shaheed – a martyr.

None has been charged with incitement.

Instead the matter has been referred by the police to the local interfaith group.

Holland insists the West must be more robust ‘at every level’ in its interrogation of what’s really at stake, in the same way people in Europe were obliged to interrogate nationalism and Darwinianism after Nazism, and in the way that Christianity interrogated how the Gospels had fostered anti-Semitism.

‘What’s needed is acknowledging the problem, at every level.  I am just astonished there’s not more of an interrogation of that by Muslims predominantly.  It’s their faith that is spattered with blood.’

Holland’s articulacy has won him a huge following and many awards, and in 2015 he was included among the Sunday Times’ 100 Most Influential People.  Does he not fear he will be branded in some way for so negative a portrayal of Islam?

‘Well it’s not illiberal to object to ideological genocide,’ he says.

He received death threats after his first film Islam: the Untold Story, also screened by Channel4.  Is he worried about that?

‘Isis is Islamic which doesn’t mean they embody Islam. Islam is just a name we give to the vast agglomeration of perspectives that go by that name.

‘You are morally obliged to ask, well, what’s within that tradition that has encouraged this rather than just burying your head in the sand and saying it has nothing to do with it whatsoever.’

It is something Europeans should be peculiarly sensitive to. European civilization after all gave us Michaelangelo, Shakespeare and Locke, as well as imperialism and the Holocaust.

‘It’s part of the continuum, but a measure of self-criticism is incumbent on a people whose culture has resulted in such crimes.’

Ironically, Holland who is married with two children, believes that the kind of Muslims who issue death threats would not mind the film, as they are always being told they are not Muslims, whereas Holland is saying they are.

As for being called racist, ‘The irony is that in our anxiety not to repeat the sin [of racism] we are sanctioning a licence to commit genocide.

‘That even to criticize that licence is somehow racist is a peculiarly grotesque paradox.’

Holland is unwilling to see himself as a prophet – historians no longer, unlike Gibbon, do civilizational failure, he says.  But, on a more personal level, he is gloomy about the moral supremacism inherent in the rise of violent Islam.

‘I don’t think there is anything inherent in human nature that implies we accept one another as equals.’

He tells of a Muslim journalist in Cairo who described a ‘civil war’ within Islam between those who believe they are superior to the rest of humanity by virtue of being Muslim, and those who do not.

‘There is no law that says that the supremacists won’t ultimately emerge triumphant. In which case, it’s bad news for everybody else. And we know as Europeans what the consequences of that will be.’