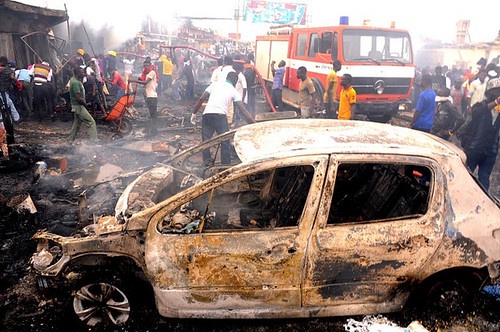 DIASPORA Nigerians in the UK and America are calling for direct military involvement in peacekeeping in Northern Nigeria, which is now third in the Global Terrorism Index. Unsurprisingly, as more British forces prepare for deployment with UN peacekeepers in restive Mali to the north, calls are growing for a similar push in the Islamist-infested north eastern and middle belt states of the former British colony.

One of the activists calling for this move, Ayo Adedoyin, CEO of PSJ UK, a new NGO working with its counterpart ICON in Washington, notes that the French have 5,500 troops committed to their former colonies. One has to wonder when the UK will commit to the same approach in Nigeria.

‘The British prefer soft power, but it’s not stopping the massacres,’ he said, as ministers of three government departments announced a postponement of a review of the 2018 so-called ‘pivot to the Sahel’.

Historically, this pivot saw an increase in British diplomatic, aid and critically military involvement in the region, building on David Cameron’s decision in 2012 to support France in regaining control of Mali after a jihadist insurrection which was exacerbated by the destruction of Gadaffi’s Libya. But Nigeria suffers from the spill-over of Sahelian Islamism, which exploits grievances specific to each situation.

Shockingly, Nigeria is now third after Afghanistan and Iraq on the Global Terrorism Index, but the former powers still operate a mysterious quarantine between the Sahel and Nigeria.

It is likely Britain will stick to its commitment to send 250 troops in long-range reconnaissance and training to the UN peace-keeping mission based in Gao, northern Mali as part of its post-Brexit fence mending with old allies. There were jitters in Whitehall even before the military coup in Mali on 18 August. A tri-partite review by defence, foreign affairs and development ministers due to have taken place in early August was postponed until September.

‘This is unfamiliar terrain for the Brits’, says Alex Vines, Africa Director at Chatham House.  ‘It’s a big deal.’

The crisis has spread to Niger and Burkina Faso and may now spill over into Côte d’Ivoire, Ghana and Senegal. With Nigeria also facing insurgency in the Lake Chad basin, Vines is concerned that ‘all major regional security and economic anchors in the region are under threat, including key UK partners’.

When will Westminster realise that the situation in West Africa is getting out of hand, and threatens key British interests in the region?

France’s recent 1,500 troop surge, additional to the 4,000 under Operation Burkhane already in the Chadian capital of Niamey reflects their own post-colonial ties and their dependency on Nigerien uranium. One in three light bulbs, and the Eiffel Tower in France, is lit from nuclear reactors powered largely by Nigerien uranium, which has the world’s fourth largest deposits.

For the two British regiments involved, this will be one of the biggest peace-keeping deployments since Bosnia, and the most dangerous since Afghanistan. It augments the three Royal Air Force Chinook helicopters and almost 100 staff needed to support them – all of whom are still there, supported by a new office in Whitehall, the Joint Sahel Department, headed up by Dr Imogen Parsons, former Save the Children Fund emergency response leader. In addition to that, MI6 had already pushed for the re-opening of a full embassy in Bamako in Mali in 2010, and small cost-effective embassies have opened in Niger and Chad.

The UK is also one of the largest humanitarian donors to the region and has contributed over £500 million in bilateral development and humanitarian assistance since 2015.

There seems however to be a curious reluctance by Britain to join the dots from the Sahel to its old colony, whose boundaries it drew, and whose social infrastructure it helped create, leaving a legacy of inter-religious rivalry and what one local Nigerian analyst calls ‘an unwinnable war’.

Despite widespread ignorance of this issue, violent attacks killed at least 142 people in northern Nigeria in one seven-day period in July, according to US-based think tank the Council on Foreign Relations. Militarised Fulani herders, supplied with guns by local cattle barons, bandits, Boko Haram terrorists and even Nigerian army forces were among major perpetrators, the report said.

Affected states included Kaduna, Borno, Zamfara, Taraba, Kogi, Niger and Adamawa, reflecting a ramping up of violence under cover of coronavirus, and prompting Edward Kallon, the UN Resident and Humanitarian Coordinator in Nigeria, to say that 10.6 million people in the region, which has witnessed more than a decade of Boko Haram insurgence, will need some form of humanitarian assistance in 2020.  This is close to a 50 per cent increase in people in need since last year, he added.

The 2019 Global Terrorism Index states that a staggering 2,040 people were killed there in 2018 alone by radicalised Fulani militants. Yet Britain remains content to operate a different trajectory in Nigeria from the Sahel, capacity building the Nigerian armed forces through a policy of ’embedding’ military advisors, and contributing humanitarian funds only, to the north.

Britain’s policy in the Sahel is described as ‘fuzzy‘ by Chatham House’s Alex Vines. Christians increasingly bear the brunt of the massacres that indicate the southward cross-border trend of Islamic militancy and its influence on the nomadic Fulani. The terror group Boko Haram are being investigated by the International Criminal Court for ‘crimes against humanity’. They are moved by religious ideology with a publicly declared policy of eliminating Christians.

However, attacks by Fulani herders, also on Christians, are not treated in the same way. Yet they proved ‘six times more deadly than Boko Haram’s insurgencies in the same year’, according to the ICON report Silent Slaughter.

US activists including Congressman Frank Wolff are calling for a Special Envoy to Northern Nigeria, appointed by the State Department to coordinate ACTION. The cross-border nature of the Islamist operations goes largely unremarked in countries that still operate along neo-colonial lines.

Local and regional opinion on the emerging Islamist threat is shifting fast, and is something we in the West must represent fairly. ‘These are arbitrary lines which the traditional African groups don’t see that way,’ says Dr Manu Lekunze of Aberdeen University. The recent House of Lords Select Committee Report also admitted that the overspill from the Sahel had “not yet registered” as a “very serious cause of instability”‘.

An ounce of prevention is worth two ounces of cure. With the recent UN warnings of potential far-reaching human suffering and regional instability, the UK would do well to make the ‘Nigerian insecurity crisis’ a foreign policy priority.