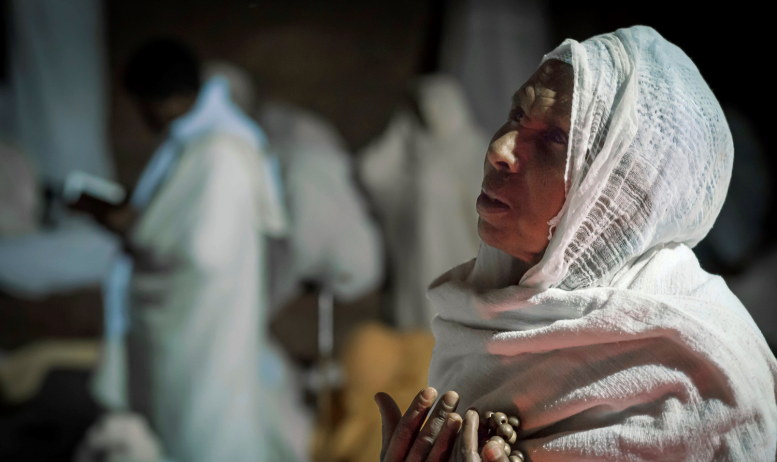 IT is amazing how drawn the post-religious West is to ethnic religion.
Be it ever so weird – Sufi trance in Syria when imams pierce the bodies of devotees with meter-long skewers; hopeless – as when Shia devotees lash themselves to a bloody pulp with razored whips; or superstitious – as when Quechua Indian Christians carry huge blocks of ice down from a glacier to purify humanity in memory of a disappearing god-shepherd – someone has exhibited photographs of it to great acclaim.
So the huge crowd at the Private View of London-based Canadian Chris Roche’s Devotions exhibition last night was not a total surprise. The fashionable h Club in London’s Covent Garden was heaving. Founded by Microsoft’s Paul Allen and musician Dave Stewart it was packed with bright twenty- and thirty-somethings. Clearly there for more than the free champagne.
Indeed, the most famous contemporary photographer of all, war correspondent Don McCullin until recently chaired a prestigious Royal Photographic Society’s competition, Faith through a Lens. Devotion is hip.
Or is it? Roche himself disagrees. ‘On the contrary it’s considered not hip. I got told by a photographer that I should be ironic in my photographs, rather than respectful. But that just doesn’t interest me.’
He wanted to get to the core, to ‘the coalface of humanity’; to do what inspired him.
‘I wanted to witness the beauty and dignity of the human spirit across traditions and frontiers, those magical moments of connection.’

His pictures – the culmination of a five-year project called just Devotion and exhibited for the next two weeks in conjunction with Photo London – certainly capture a yearning, which may be inherited; his father studied to be priest but never realized his vocation.
Roche’s lens peers deep into the eyes of such subjects as the chai wallah in Banaras, India after whom he giddily leaped into the fetid waters of the Ganges just to capture some quality in the grizzled features of this Hindu ‘baba’.
And he risked his life to gain access to a group of Chechen Muslim women zikr singers in the Isis recruiting grounds of Kist in the Pankisi Gorge in Christian Georgia. Following the traditions established by the 19th-century Chechen mystic Kunta-Haji Kishiev they practice a combination of prayer, recitation, singing, and dancing that he called Loud Zikr. The dozen or so elderly women meet to keep alive their traditions for the younger generation who are rarely interested. Roche writes on his website that the newer Wahhabist mosque is growing in influence. ‘It can be seen in the beards of the younger men and the increasing number of younger women wearing headscarves. However, the Kist Sufis of Pankisi Gorge continue their zikrs and to pray for “Marshua Kavkaz” – peace in the Caucasus.’
Most moving to me of all is what he calls his ‘Rembrandts’: pictures taken deep in a fifth-century Ethiopian rock church in Tigray. Devotees read their bibles in ancient Amharic script by the dim light of tiny flares. ‘Their humility and dignity. They were oblivious to the fact I was there. Silent.’
These pictures won a UNESCO accolade: ‘This collection of photographs can be valued as an irreplaceable cultural archive and as a body of work with great artistic integrity…’.
Roche is at pains however to distance himself from any theological reflection. ‘I don’t have any point to make, any intellectual argument to make. I just wanted to capture the faces, not the dogma, or the politics of religion. It was the magic of making the connections with people.’
The 51-year old got into photography just five years ago. And he chose his subject, he jokes, as a reaction to years of making yoghurt commercials for TV.
But his influences go deeper. His father, an Irish Catholic seafarer with the merchant marines, studied for the priesthood at a monastery in Wales before getting married and turning to forestry in Canada – where Roche was born. But it was in Nigeria, Roche thinks, that the cultural displacement of his roving upbringing did its work. His Dad took him when he was six to meet local chiefs in full rig. He was just six.
His pictures are beautiful, with a quality of light and harmony that transcend their subject and that have clearly enchanted judges in the many awards he’s won: the Sony World Photography National Award in 2016 and two other golds that year alone. His photographs have been published in the national press, exhibited at Royal Geographical Society in London and at the United Nations Office at Geneva.
But that for me is a problem. Religion is not at bottom beautiful. It is often an agony of lostness, of snares and exploitation – something of which Roche acknowledges on his website. There is nothing beautiful about child sacrifice in the Bon religion of western Nepal or indeed among the Quechua, practices that still survive where the evangelical missionaries have not come. And some hard-liners think it verges on the sentimental to mourn the loss of many religious practices through globalisation, global warming and Chinese political oppression, to name just three of the dehumanising influences that Roche has documented.

Curiously – and tellingly – there is nothing of the Protestant religion on show, although Roche’s mother was Protestant (and not allowed to marry his father on Irish territory). The disenchantment of the world that at the Reformation dispensed with religious accretion to rid humanity of superstition and priestcraft, is, by definition, mostly unphotographable. But that’s to miss the point: humanity is God’s temple; creation is his ark; the secular world his sacred domain.
So when Roche says all religions share things in common – he points out there are pilgrimages, prayer beads and shrines ‘in every tradition’ – he looks startled when I tell him that Protestants don’t.
What the Reformation won for us in freedom to inhabit fully the beauty, dignity and magnificence of God Himself, is getting lost as this post-Christian age seeks its diversions.
And veteran photographer of the world’s evanescent – and not always pretty – rituals, Jeremy Hunter, who came with me to the show, says Roche ‘has gone for all the obvious subjects’.
And what of Roche’s own faith? ‘I have a faith. I don’t believe in a God who comes down; like in organized religions. That is a tricky question … I don’t want to answer with cliché and banality. We are all unique articulations of God, and to me God is the vibrating energy of everything. We are all connected and we all have our different paths.’