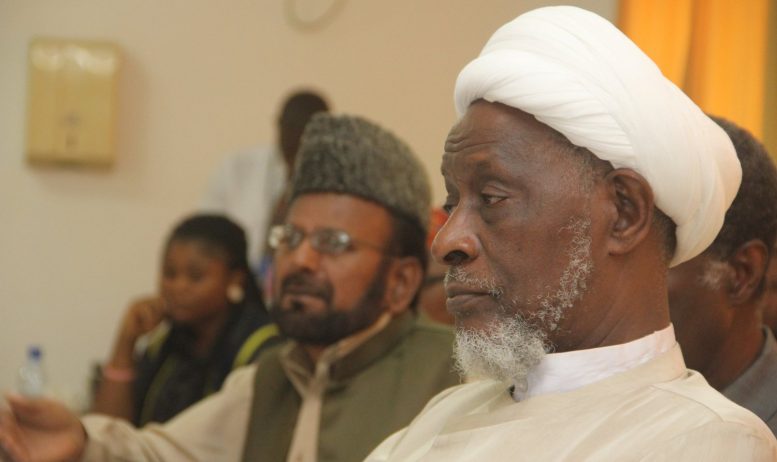 This piece was first published by The Media Project.

Freetown, 2 December 2017 – WHEN Anglican pastor Hassan John noticed a little girl hawking groundnuts in a street in Jos in Northern Nigeria when she should be in school, he was curious.  Primary school fees are not high.

He followed her into her community – and realized too late she was Muslim.

Muslims kill Christians in and around Jos every day, and Canon John, former Director of Communications for the Archbishop, Benjamin Kwashi, has a bounty on his head.

Already committed, he pressed on into the community known quaintly as Rayfield – it once housed colonial-era British tin miners and is now 100 per cent Hausa Muslim – and began something remarkable in a province riven by violence from the deadly Islamist group Boko Haram, or militarised Fulani herders.

The little girl’s mother was a widow – one of four wives of her husband who had been killed in what is called ‘the crisis’ and she had no work or food.

John set about trying to help, and despite initial reluctance (‘Who wants to go in there to die?’) from his Christian congregation, today there is a flourishing skills training programme for upward of 180 Muslim women, and education for 150 children, indicative of how trust can be re-built from the ashes of religious hatred.

John tells his story at Freetown, Bo in the south and Makeni in the north as well as to the President, Ernest Bai Koroma and the National Security Council.  His trip has been facilitated by the former British High Commissioner Peter Penfold.

He has worked for seven years at the frontline of the Boko Haram insurgency which in 2015, according to Human Rights Watch, claimed 3,500 lives, and is now spreading down through Niger and Mali.

After each atrocity, he would dash to the scene with his camera and file footage for CNN, for whom he is now Nigerian ‘fixer’.

His peace-making is working, even attracting the attention of the Archbishop of Canterbury who paid for his flight to Freetown.

Intermarriage is almost universal, unlike Northern Nigeria where the severe Wahhabi interpretation of the faith has filtered down from North Africa.  Sierra Leone’s deadly civil war from 1991 to 2001 had no religious affiliation.

But that’s no reason for complacency.

Revd Dr Usman Fornah, Secretary General of Sierra Leone’s IRC who convened the meeting especially to hear John, said afterwards:  ‘It was timely and well appreciated by the religious communities in Sierra Leone because of the election and because of the little skirmishes of religious intolerance we have started experiencing.’

In a small poverty-stricken nation with a sixty to thirty percent Muslim/Christian split looking towards the twin pressures of Al Qaeda in the Magreb (AQIM) to the north, and Boko Haram to the east, the last thing the country needs is enforcers of Islamic purity.

But extremists are infiltrating Sierra Leone’s tight-knit communities, destroying Ahmadiyya mosques (widely persecuted elsewhere in the Islamic world as ‘heretic’, but not, until recently, in Sierra Leone), banning women from the mosques, and brain-washing youth.

Women’s Coordinator of the IRCSL, Rev Christiana Sutton-Koroma said: ‘Things are happening.  We are seeing signs.  Women are not allowed into mosques.  It will spill over.  Young people can be easily captivated for just $20.’

With elections in March, Sierra Leoneans are watching for anything that could spark the violence that devastated the country for ten years, when youngsters in the hinterland with too little to do and resentful of the wealth of corrupt officials, fell under the spell of Liberian militants from across the border, and, fuelled by bush drugs and an alien ideology, marched on Freetown, destroying everything in their path.

Everyone you talk to is fearful of a return of the conditions that incubated the mayhem, famous for amputations of children, and the targeting of all those in any kind of authority.

They look warily therefore at the civil war in big brother Nigeria where successive governments have failed completely to stem the insurgency.  Like the hydra, it has split into two, with one faction led by Abu Al Barnawi, son of founder Mohammed Yusuf with links to AQIM; and the other faction led by Abubakar Shakau (alleged wrongly to have died) joining up with ISIS.

Canon John told Sierra Leone’s leaders:  ‘Jos is now full of illegal weapons.  The youth are not listening to their leaders.  We no longer comment when we see dead bodies in the streets.’

It got so bad that the youths moved back to their traditional ways including revenge attacks by former Christians, and even cannibalism of enemies to destroy their spirits.

John also notes the abductions of 15,000 women from across the region – far outweighing the 276 Chibok schoolgirls whose plight became briefly fashionable among Obama followers and celebrities in 2015.

Plans resulting from John’s visit include discussions at regional level through the Economic Community of West African States (ECOWAS), the dissemination of more – and more current – information possibly in partnership with the British Foreign and Commonwealth Office, and an improvement in intelligence.

‘We cannot grow children in a war situation.  We have lost control because we didn’t want to pay attention to the little issues in the beginning, and now we don’t know what to do,’ said Canon John.

To the roomful of Muslim and Christian leaders including the Sheikh of Freetown and Anglican Archdeacon of Christchurch, he added: ‘What you have here is beautiful.

‘If you up your game now, when the pressure comes, you will begin to teach the other African countries about where we need to go.’